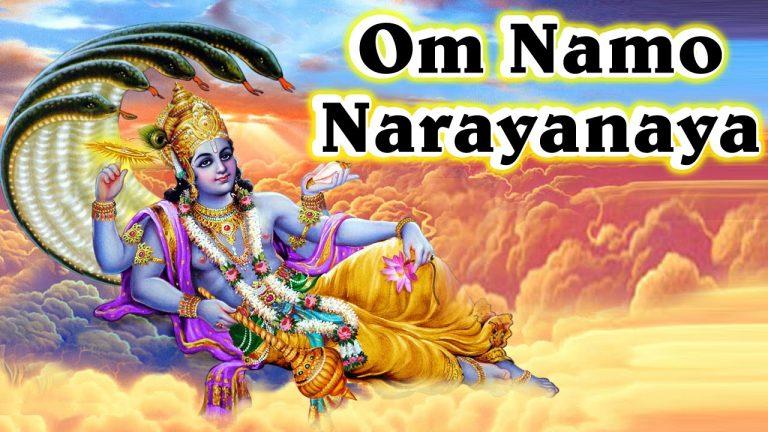 „I bow down to the divine.”

Narayana is the sacred name of the Supreme God in his infinite all pervading aspect. He is the Purusha of Purusha Suktam. Narayana is also known as Hari and Vishnu and is worshiped as Supreme Purusha or Purushottama in Hindu ancient sacred texts such as the Vedas, the Puranas and the Bhagavad Gita.

He is one of the 24 forms of Lord Vishnu through which Narayaṇa manifests himself. The accompanying form of Lakshmi is named Kanti.

The 5th verse of the Narayana Sukta, a sacred hymn in Yajurveda (an ancient Vedic Sanskrit text), explains that Lord Narayana penetrates whatever is heard or seen in this universe from outside and inside alike.

Another name for Lord Narayana is „The One who rests on Water”. In ancient Sanskrit. the waters are called narah, the waters are, indeed, produced by the first Being (Nara-Narayana); as the waters were his first residence, He is named Narayana.

In Sanskrit the word „Nara” can also refer to all living entities or human beings. Thus, another meaning of Narayana is „resting place for all living entities”. The close connection of Narayana with water explains the constant illustration of Lord Narayana in Hindu traditional art as sitting or standing on an ocean. In the Kurma Purana (one of the eighteen Mahapurana) Lord Narayana is identified with Krishna-Vishnu and Brahman.

In addition, Lord Narayana is believed to be the 1st Acharya of the Advaita school of thought as Adi Shankara mentions in his text and works.He is spoken of in the sacred scriptures as being „parameshwar”, „parabrahman”, „parajyothi”, „paramatma” and „parashakti” which are all different paths of saying „supreme” or „absolute”.

In the scriptures, it is written that that „Narayana parabrahman tatvam Narayana paraha”, which directs to how Lord Narayana is essentially the supreme force or essence of all.

In the Mahabharata, Lord Krishna is usually referred to as Narayana and Arjuna as Nara. The epic text identifies them both in plural „Krishnas”, or is incorporated in the incarnations of the earlier incarnations of Lord Vishnu, recalling their mystical identity as Nara-Narayana.

In order to have insight into and validate a Sanskrit mantra for ourselves, the mantra must be experienced and felt through introspection. Therefore, practice the mantra 108 times daily with a correct pronunciation and sincere intentions.