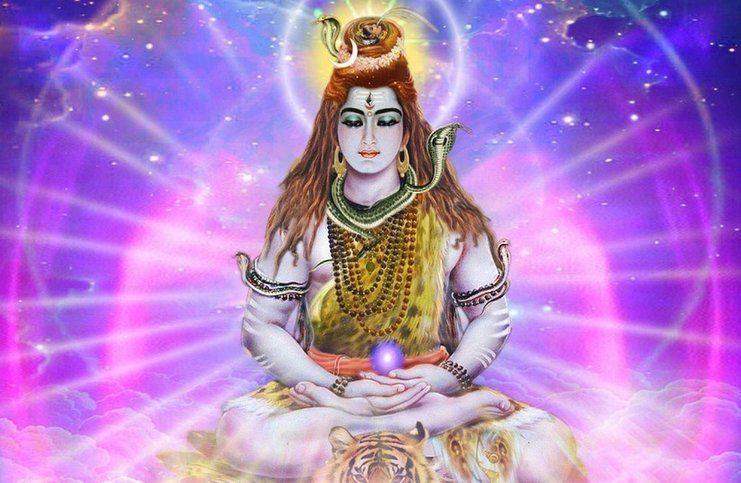 There is no exact way to understand and translate the meaning of this potent mantra into English. It is a salutation to Shiva, signifying „I bow to Shiva.” Om Namah Shivaya mantra is also known as the great redeeming mantra.

Lord Shiva signifies „The Auspicious One”, also known as Mahadeva (or Great God), is a popular Hindu deity and is recognized to be the Supreme God within Shaivism (an important Hindu sect), one of the 3 most influential denominations in Hinduism.

More importantly, Lord Shiva is regarded as one of the primordial forms of God, such as one of the 5 fundamental aspectsof God in the Smarta spiritual tradition, and “the Transformer” or “the Destroyer” among the Trimurti (three forms), the Hindu Trinity of the primary aspects of the divine. Lord Shiva, the Transformer, is also respected as the patron god of yoga and arts.

Lord Shiva is commonly adored and venerated in the aniconic form of Lingam. Lord Shiva of the highest level is transcendent, omnipotent, limitless, formless, and unchanging.

However, Lord Shiva also has many fearsome and benevolent aspects. In benevolent aspects, Shiva is commonly depicted as an all-seeing Yogi who lives an ascetic life on Mount Kailash, Himalaya, place of peace and power, as well as a householder with wife Parvati (the Hindu goddess of fertility, divine strength, abundance, love, devotion, and power) and His 2 children, Lord Kartikeya and Lord Ganesha (The Remover of Obstacles), or as the Cosmic Dancer.

These 5 holy syllables represent the 5 primordial elements of earth, fire, space, air, and water. Therefore, this healing mantra leads awareness in the reverse order from manifestation back to the Divine (source) from which manifestation arose. It is the healing mantra that has been empowered from Guru to disciple since the earliest times.

Chanting this mantra should be practiced in a calm, gently and relaxed and in the same time a meditative mental state, in present moment. Due to the fact that this mantra is a salutation to the divine forces of life, to the Divine, it should pe practice with respect.

It has been said about this soothing mantra that if this mantra vibrates continually in your spiritual heart, then you have no need to perform hard austerities, to meditate, or to practice other types of spiritual exercise (this is the only sadhana). To repeat daily this pacifying mantra you need no rituals or ceremonies, nor must you repeat it at an auspicious time or in a precise place but you have to recite it with a sincere heart and a correct pronunciation.