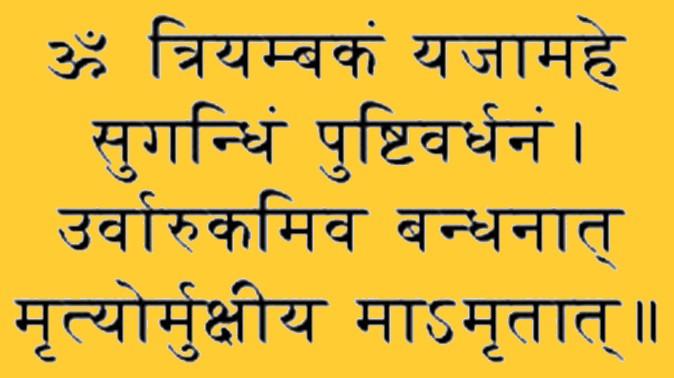 Moreover, it is sometimes known as the Mrita-Sanjivini mantra because it is an essential component of the „life-restoring” practice given to the primordial sage Shukra after he had completed and mental and physical demanding long period of austerity.

This soothing mantra is from the Vedas. It is written in the Yajur Veda (3-60). This potent mantra worships a three-eyed deity frequently identified with Shiva – The Auspicious One.

It was a secret mantra, and it was the only Rishi Markandeya (from the Hindu tradition) in the world who knew about Maha Sanjivini mantra. The Moon was once in trouble, cursed by King Daksha (son of Lord Brahma). Rishi Markandeya gave this powerful mantra to daksha’s daughter, „Sati” for the life of Moon.

Additionally, this mantra is highly respected by the sages as the heart of the Veda. Along with the amazing Gayatri mantra, it holds the highest place among the many mantras used for meditation and contemplation.

I meditate on Shiva, the 3 eyed one.

May I be free from the Bondage of Death.

May I not be without the nectar of immortality.

This potent mantra is said to have the power to remove all sufferings, remove diseases and any type of physical problem, ward off all evils, dissolves inner fears, and grant the aspirant with energy and health. In addition, to recite this mantra daily purifies the practitioner. If you can’t chant or pronounce this mantra, you can just listen to it with closed eyes and feel the power of divine mantra.Moreover, it is said that when this mantra is it recited (aloud or mentally) with sincere devotion, adoration, veneration, and serious contemplation the knowledge of this birth and death cycle (Samsara) is revealed to the devotee. Hence, this mantra helps in overcoming the fear of death.

The Great Death-Conquering Mantra can be recited by anybody. More importantly, if the practitioner understands the meaning of this mantra, word for word, before chanting it the spiritual benefits will increase. That’s because by knowing the meaning, the practitioner can easily contemplate on the aspect of Samsara – birth and death cycle.

Lastly, reciting this mantra early in the morning is a very good practice. However, you can recite this mantra any time of the day too, just pronounce it correctly.