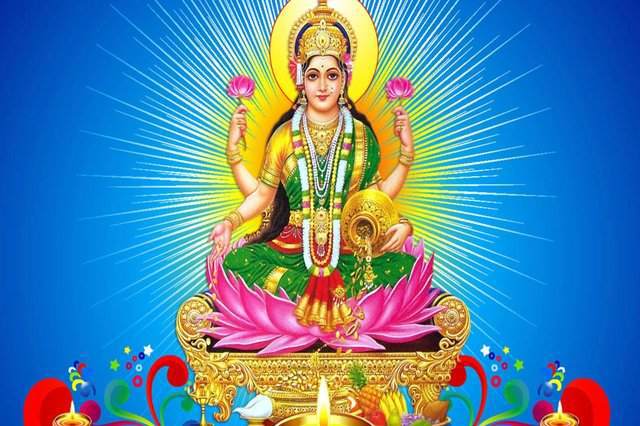 Kanakadhara Stotram is a sacred hymn. It is called Kanakadhara because when Adi Sankara recited it, the Goddess Lakshmi (The Goddess of abundance) generated a shower of golden fruit. It was written in the 5th century BC

It is a powerful Sanskrit hymn dedicated to Goddess Lakshmi, the Hindu Goddess of prosperity of wealth, fertility, courage good and fortune. The Goddess the divine consort of Lord Vishnu and is considered to defend her followers from all kinds of miseries in life and money-related sorrows.

Chanting Kanakadhara Stotram benefits:
Listening or regular chanting of this sacred hymn pleases the Goddess Mahalakshmi and she grants upon her loving devotees all opulence, wealth and prosperity and both spiritual and material, and puts an end to all poverty and impediments.

To the Hari who wears supreme happiness as Ornament,

The Goddess Lakshmi is attracted,

To the unopened buds of black Tamala tree,

Let her who is the Goddess of all good things,

Grant me a glance that will bring prosperity.

Again and again return, those glances,

Filled with love and hesitation,

Of her who is born to the ocean of milk,

To the face of Murari

Like the honey bees to the pretty blue lotus,

And let those glances shower me with wealth.

With half closed eyes stares she on Mukunda,

Filled with happiness, shyness and the science of love,

On the ecstasy filled face with closed eyes of her Lord,

And let her, who is the wife of Him who sleeps on the snake,

Shower me with wealth.

He who has won over Madhu,

Wears the Kousthuba as ornament,

And also the garland of glances, of blue Indraneela,

Filled with love to protect and grant wishes to Him,

Of her who lives on the lotus,

And let those also fall on me,

And grant me all that is good.

Like the streak of lightning in black dark cloud,

She is shining on the dark , broad chest,

Of He who killed Kaidaba,

And let the eyes of the great mother of all universe,

Who is the daughter of Sage Bharghava,

Fallon me lightly and bring me prosperity.

The God of love could only reach ,

The killer of Madhu,

Through the power of her kind glances,

Loaded with love and blessing

And let that side glance,

Which is auspicious and indolent,

Capable of making one as king of Devas in this world,

Her side long glance of a moment,

Made Indra regain his kingdom,

And is making Him who killed Madhu supremely happy.

And let her with her blue lotus eyes glance me a little.

To her devotees and those who are great,

Grants she a place in heaven which is difficult to attain,

Just by a glance of her compassion filled eyes,

Let her sparkling eyes which are like the fully opened lotus,

Fall on me and grant me all my desires.

And shower the rain of wealth on this parched land,

And quench the thirst of this little chataka bird,

And likewise ,drive away afar my load of sins,

By the glance from your cloud like dark eyes.

She is the goddess of Knowledge,

She is the darling of Him who has Garuda as flag,

She is the power that causes of death at time of deluge,

And she is the wife of Him who has the crescent,

And she does the creation , upkeep and destruction at various times,

And my salutations to this lady who is worshipped by all the three worlds.

Salutations to you as Vedas which give rise to good actions,

Salutation to you as Rathi for giving the most beautiful qualities,

Salutation to you as Shakthi

,who lives in the hundred petalled lotus,

And salutations to you who is Goddess of plenty,

And is the consort of Purushottama.

Salutations to her who is as pretty.

As the lotus in full bloom,

Salutations to her who is born from ocean of milk,

Salutations to the sister of nectar and the moon,

Salutations to the consort of Narayana.

Salutations to her who has the golden lotus as seat,

Salutations to her who is the leader of the universe,

Salutations to her who showers mercy on devas,

And salutations to the consort of Him who has the bow called Saranga.

Salutations to her who is daughter of Bhrigu,

Salutations to her lives on the holy chest of Vishnu,

Salutations to Goddess Lakshmi who lives in a lotus,

And saluations to her who is the consort of Damodhara.

Salutations to her who is light living in Lotus flower,

Salutations to her who is the earth and also mother of earth,

Salutations to her who is worshipped by Devas,

And salutations to her who is the consort of the son of Nanda.

Giver of wealth, giver of pleasures to all senses,

Giver of the right to rule kingdoms,

She to whom Salutations remove all miseries fast,

And my mother to you are my salutations.

He who worships your sidelong glances,

Is blessed by all known wealth and prosperity,

And so my salutations by word, thought and deed,

To the queen of the heart of my Lord Murari.

She who sits on the Lotus,

She who has lotus in her hands,

She who is dressed in dazzling white,

She who shines in garlands and sandal paste,

The Goddess who is the consort of Hari,

She who gladdens the mind,

And she who confers prosperity on the three worlds,

Be pleased to show compassion to me.

Those eight elephants from all the diverse directions,

Pour from out from golden vessels,

The water from the Ganga which flows in heaven,

For your holy purifying bath,

And my salutations in the morn to you,

Who is the mother of all worlds,

Who is the house wife of the Lord of the worlds,

And who is the daughter of the ocean which gave nectar.

She who is the Lotus,

She who is the consort,

She who has glances filled with mercy,

Please turn your glance on me,

Who is the poorest among the poor,

And first make me the vessel,

To receive your pity and compassion.

Shloka 21
Stuvanti ye stuti bhirami bhiranvaham
Trayamayaṃ tribhuvana mātaraṃ ramam
Guṇadhika gurutara bhagya bhagino
Bhavanti te bhuvi budha bhavi tasayaḥ.
O Goddess, controller of the Universe and protector of the people, blessing
with your limbs, and gazing with your lotus-like eyes, forgive me. With my
heart filled with fear of poverty, I surrender myself wholly to you, that you
may watch over me every day with unbroken compassion.
Iti srimad sankaracarya krta
Sri kanakadhara stotraṃ saṃpurṇam.

Hanuman Mantra For Success In Life And To Win Court Cases
Hanuman, also known as Bajrangbali or Mahavira, is
1k.