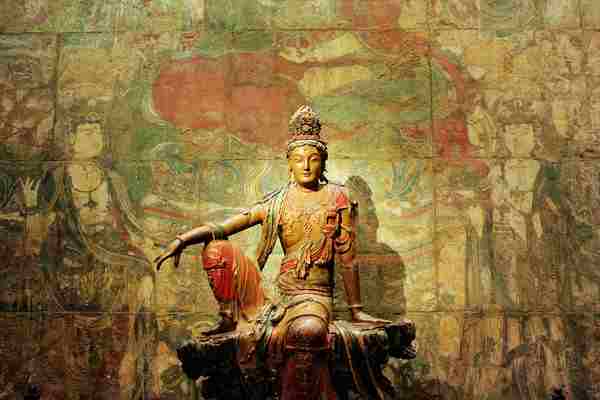 In both Buddhism and Taoism, Kuan Yin (pronounced Guan Yin) is the Goddess of compassion, and She is the Japanese Bodhisattva Kanzeon or Kannon.

Kuan Yin’s original name in Sanskrit is Avalokitesvara, which roughly signifies „The Observer of the sights and sounds of the world”. Some Sanskrit scholars say that the Bodhisattva began as the Buddhist God of Mercy, Juichimen. The original statues portray Her as a small and somewhat androgynous male. However, by the late 8th century AD Quan Yin begins to be depicted as a female.

One legend states that the Bodhisattva began life as a male who later became a female, a She is sometimes described as half male and half female, plus She is also shown as a female. Another legend of the Bodhisattva origin affirms that she was once the very evil Hariti, a mother who sucked 500 demons that she was converted to Buddhism by Gautama Buddha himself.

Like Bodhisattva Avalokitesvara, she is also portrayed with a thousand arms and varying numbers of eyes, hands, and heads, sometimes with an eye in the palm of each hand, and is frequently called „thousand arms, thousand-eyes” Bodhisattva. More importantly, in this aspect she represents the omnipresent mother, looking in all directions at the same time, sensing the afflictions of humanity and extending her many arms to pacify them with infinite expressions of her mercy.

Additionally, the Bodhisattva is usually portrayed as riding a mythological animal known as the Hou, which somewhat looks like a Buddhist lion, and symbolizes the divine supremacy exercised by Quan Yin over the powerful forces of nature.

By chanting this amazing mantra, we open our hearts, change our vibration and provide love and compassion to those around us. During the mantra meditation practice, a sincere heart is required.

3 Buddhist Chants For Meditation And Relaxation
Sound is a form of vibration. Actually, everything
357

5 Tibetan Buddhist Mantras That Can Be Chanted During Tough Times
In Tibet, the Buddhist tradition is ancient, the result
386