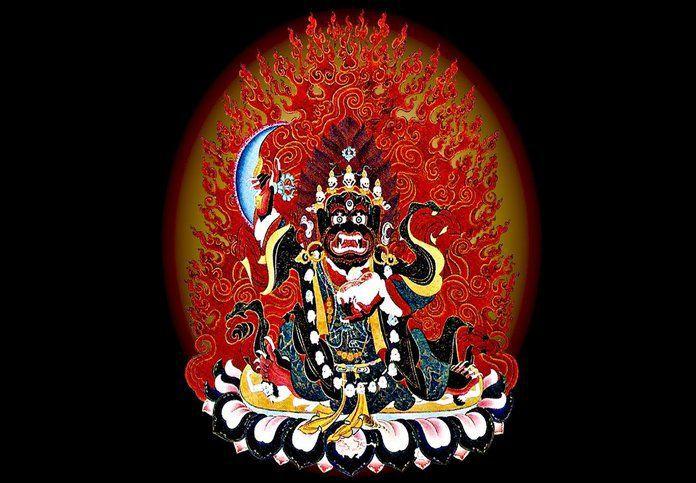 Mahakala is a protector deity known as a Dharmapala in Vajrayana Buddhism, especially most Tibetan traditions, in Tangmi and in Japanese Esoteric Buddhism. Maha literally translates as great and kala signifies time or death, hence Mahakala means “beyond the time” or ”Great Dark One”.

He is usually black in color and appears in 75 different forms, each an emanation of a different Buddha. Black can represent the total absence of color and signifies the true nature of Mahakala as ultimate or absolute reality and transcendence of all form.

Despite a wrathful demeanor, the essential quality of Mahakala is an awakened compassion. His blessings are said to quell difficulties and hindrances arising from depression and anger. He is also in charge of all dharma protectors.

”Mahakala has never been known to harm one being, even in the slightest manner, because he is constantly benefiting beings through the continuous play of the enlightened mind.” – Khenpo Karthar

The form varies according to the different teaching lineages. For instance, there is the four-armed Mahakala who is the protector of the Drikung Kagyu, the two-armed big-mouthed Mahakala Bernakchen of the Karma Kagyu, and six-armed Mahakala of the Gelugpas. The image of Mahakala shows that he is on the top of a white elephant and holds the precious wish-fulfilling gem ”yid bzhin nor bu” to his heart. The skull-cup in his left hand contains a vase of jewels in a sea of nectar, symbolic of the wealth that arises from the spiritual method.

“There is an emanation of Avalokiteshvara which arose in the form of Mahakala and this is the Shangpa Kagyu Mahakala with one face and six arms, in a standing posture. This form was later adopted by Tsongkhapa and followers as the main protector of the Gelugpa School.” – Jeff Watt

He is the most important wisdom dharma protector in Tibet. Mahakala’s blessings are particularly well-known for quelling obstacles and difficulties arising from depression and anger. In addition, chanting this mantra removes all obstacles in wealth flows, destroys confusion, doubts, and ignorance. He can exterminate all black magic, demon, evil, and enemy’s encroachments. As a result, many people cultivate his practice in Tibet.

It would be not entirely appropriate to attempt this spiritual practice without the associated empowerment.

“Some people try to practice without having received lung or empowerment. Without these prerequisites, or if their practice is incomplete, though there may be some blessing, it will not be as effective. And surely all aspects must be complete in order to attain any kind of realization.” – Khenpo Karthar Rinpoche