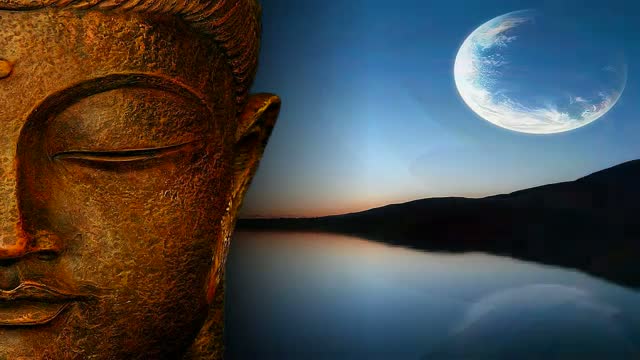 This amazing Buddhist chant (also know as Da Bei Zhou mantra) is a mantra synonymous with Bodhisattva Avalokitesvara (or Chenrezig in Tibet). The mantra is usually used to remove the negative karma, for energetic protection and to purify the soul of the practitioner.

„One who recites and holds this sacred mantra can heal all the 84000 different types of diseases of the world, without exception. Bodhisattva Avalokitesvara also can command all spirits and ghosts, vanquish heavenly demons and tame all exterior-paths practitioners.

If one can chant this healing mantra in conformity with Dharma and arouse merciful and compassionate heart towards all sentient beings, I will then command all Dragon Kings, virtuous Gods and Vajra Secret-Traces Divinities to always follow and defend him, never leaving his side, defending him as their own eyes and lives.“ – Avalokitesvara Bodhisattva explains the mantra effects.

This chant is not a mantra, but a sacred Dharani, which is commonly understood as a mnemonic instrument which incorporates a particular spiritual teaching or a specific chapter of a Buddhist sutra. This Dharani teaches us that the one who practice this potent mantra that will be born in the Paradise of the Daughter, will be spared the 15 bad kinds of death, and that human births after this Paradise of the Daughter will be auspicious ones conducive to progress toward complete spiritual enlightenment.

Note – this powerful mantra does not translate well into the English language because the Sanskrit words of the mantra were chosen not only for meaning but also for rhythm, rhyme, and mitre.

Some of its great powers include – curing illnesses, dissolves negative programs, fulfilling every wish of every sentient being and receiving protection and blessings from Pratyekabuddhas, Buddhas, Sravakas, and Dharma Protectors.

Moreover, by reciting this healing mantra everyday with sincere intentions and correct pronunciation, you would be able to choose to be reborn into any Pure Land for your next reincarnation.

„Someone asks, “I chant it. Why haven’t I been cured?”

You haven’t been healed because your heart is not sincere.

With a sincere heart, you will absolutely obtain a beneficial response from this healing mantra.

When you have recited 108 times daily for a thousand days, the 10 directions in the courts of Yama (God of death) will be delighted and all illness will be healed.

You will have earned a great deal of merit because for 3 years: while chanting the mantra, you were not creating offenses (negative actions), eating meat, you weren’t drinking wine, or eating the 5 pungent plants.”

Venerable Master Hsuan Hua also said: ”In the hells (lower realms), there is a platform on which stands all the actions you’ve ever done: killing, stealing, arson, reliving all those experiences again and again. But if you have no negative karma, then nothing will show up on the screen.

Because you are free of karmic obstacles and hindrances, they hang a sign up in the hells which say, „So and So recites the mantra and has already destroyed his offense-karma.”

All spirits and ghosts in the hells must bow down in respect to him if they were meeting the Buddhas of the present, future and past.

They defend him as they would the Buddhas and they must inform all other spirits and ghosts not to give him any trouble. So the power of this mantra is inconceivable.” – Venerable Master Hsuan Hua’s quote.

3 Buddhist Chants For Meditation And Relaxation
Sound is a form of vibration. Actually, everything
126