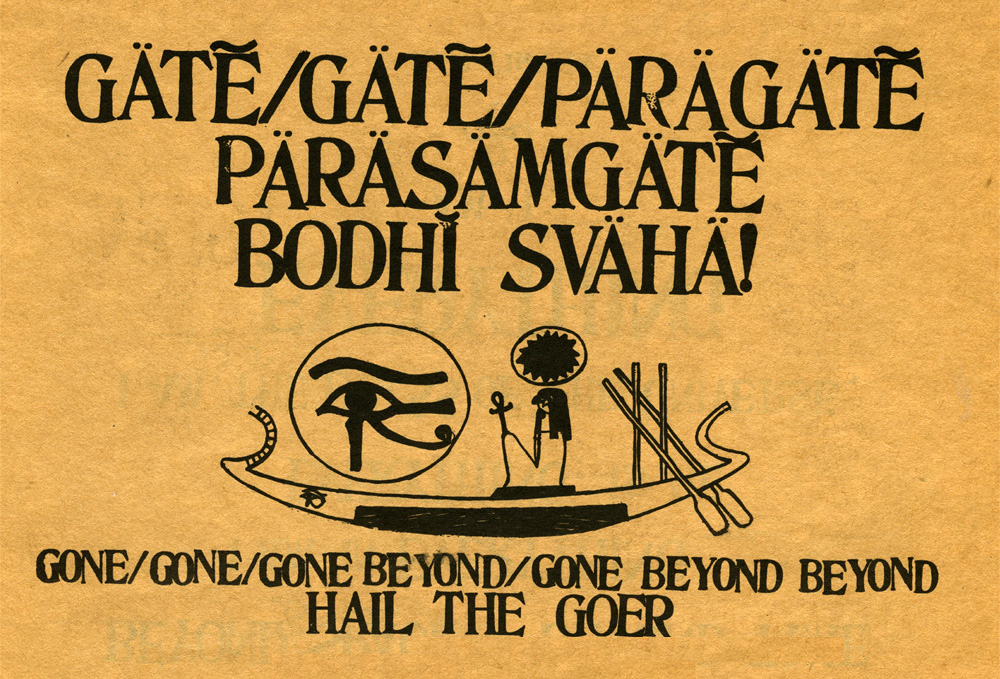 The Heart Sutra is a teaching by Chenrezig (also knows as Bodhisattva Avalokitesvara), the Buddha of Compassion, to the monk Sariputta (disciple of Gautama Buddha).

This sutra is chanted frequently by followers of Buddhism at meetings and daily meditation practice. Although The Heart Sutra is very brief it contains fundamental concepts of Buddhist Philosophy. These include the four noble truths, the skandhas, the central concept of Mahayana Buddhism, Emptiness and the cycle of interdependence.

Mahayana means the great vehicle, it is the Buddhism of China, Japan, Tibet and Korea. It appears around the first or second century CE as a reaction against a few highly analytical schools of Buddhism which had developed in the 600 years since the time of the Gautama Buddha.

These Buddhist schools were referred to as Hinayana, the lesser vehicle by the Mahayanists. Zen (or pinyin), which appeared around 800, in China is acknowledged a school of Mahayana.

„Gone, gone, gone to the other shore beyond. O what an awakening, all hail!”

This pacifying mantra encapsulates the entire teaching of the Heart Sutra for the benefit of those of the sharpest mental faculties.

His Holiness the 14th Dalai Lama explains the mantra both as a device for measuring one’s own level of spiritual attainment and as an instruction for practice, and translates it in English as „go, go, go beyond, go thoroughly beyond, and establish yourself in enlightenment”.

In the discourse (watch here), Dalai Lama gives a similar explanation to the four stages as in the previous paragraph.

3 Buddhist Chants For Meditation And Relaxation
Sound is a form of vibration. Actually, everything
600

5 Tibetan Buddhist Mantras That Can Be Chanted During Tough Times
In Tibet, the Buddhist tradition is ancient, the result
542