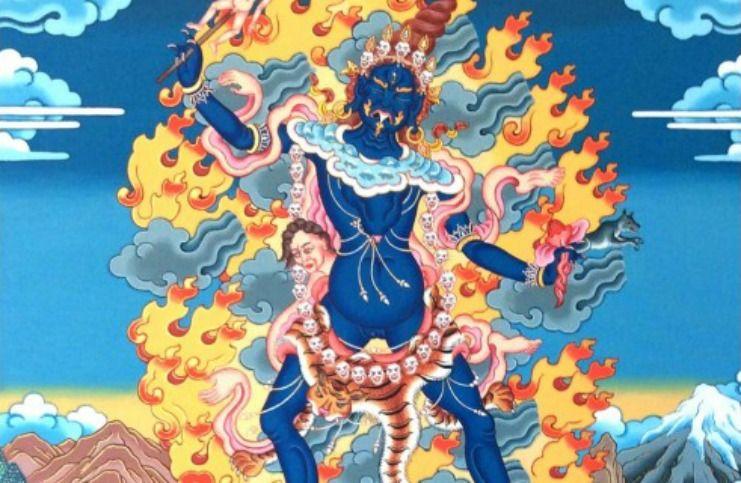 Ekajati, also known as Blue Tara, is a main female protector in both the Nyingma and Sarma (Sakya, Kagyu, Gelug) Schools of Tibetan Buddhism. In Sarma Schools, She is the mother of Shri Devi and has a more common appearance, with one face, two breasts, and three eyes, always in a semi-wrathful visage and with one braid of hair.

Blue Tara is the protector of secret mantras and her name literally translates as “the mother of the mothers of all the Buddhas,” which represents the absolute and ultimate unity. As such, her own powerful mantra is also secret.

Another name for Ekajati is Ugra Tara, ”Ugra” meaning wrathful in ancient Sanskrit. She is considered to be the most powerful goddess in the Vajrayana pantheon, and just by listening to her mantra all hindrances and obstacles are destroyed, also bringing good luck and intense religious enjoyment.

According to Tibetan legends, She is an acculturation of the Bon goddess of Heaven, whose right eye was pierced by the energetic tantric master Padmasambhava (also known as Guru Rinpoche, who was an 8th-century Indian Buddhist master) so that She could much more effectively help him subjugate Tibetan demons. Frequently, She appears as a liberator in the mandala of the Goddess Green Tara. Along with that, her ascribed powers are removing the fear of enemies, spreading happiness and joy and removing personal hindrances on the path to enlightenment.

According to Chogyal Namkhai Norbu Rinpoche (a Dzogchen teacher), Blue Tara is the main guardian of the secret Dzogchen teachings and is “a personification of the essentially non-dual nature of primordial energy.” Dzogchen is the most closely guarded teaching in Tibetan Buddhism, of which She is the main guardian as mentioned above. It is said that Sri Singha (the son of King ‘Accomplisher’ and his wife queen Nantaka) himself entrusted the Nyingthik teachings to her care. To the great master Longchenpa, who initiated the dissemination of certain secret Dzogchen teachings, She offered uncharacteristically personal guidance.

Furthermore, She is the supreme protectress of the Nyingmapa (the oldest of the four major schools of Tibetan Buddhism) practices. Blue Tara also functions as a guardian of mantras, preventing them from being disclosed to those unworthy to use them, and ensuring that those who have been empowered to use them do so for appropriate purposes.

She has one head, three breasts, two hands and a third eye. A long necklace of severed human heads adorns her body. In her right hand, she waves an impaled and upright human corpse. With her left hand, Ekajati dispatches a female wolf messenger. Ekajati stands in the warrior pose, on a flaming mandala of triangular shape. When Ekajati appears to yogins in hagiographies, She is particularly wrathful. At times, She appears twice in human size, brandishing weapons and served by witches drenched in blood.